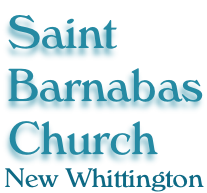 The foundation stone of St. Barnabas' Church was laid on June 11th (St. Barnabas' Day) 1884 by Mrs. Mark Firth of Sheffield. The church opened for public worship during the following November. Firth School was at the time being used for meeting before the church was built but was becoming inadequate, so a separate church for New Whittington (at the time still part of the parish of St. Bartholomew's Old Whittington) was built. The Rev Clement Clover Ward was appointed Curate-in-Charge from 1882 onwards, and it was mainly due to his whole hearted efforts that the church of St. Barnabas was built.

Rev. L. P. Sayles was the first to reside in St. Barnabas House (now the current Vicarage) which was a gift from Maurice Deacon, Civil Engineer who was Managing Director of the Sheepbridge Coal and Iron Company Ltd.

The Consecration of the Church was on Wednesday 4th May 1927 by the Lord Bishop of Southwell (no Derby Diocese then).

The Induction of the new Vicar Rev. T. W. Thornber was on Thursday 28th July 1927. It was a "well attended service with a high spiritual tone" and was followed by "Tea in the New School". The New School was the old Church Hall opposite The Forge, it was built just before the Church was consecrated.

A list of Vicars to the present day follows:

In 1919, following the First World War, a war memorial was erected in the church. After the Second World War the names of those killed in that conflict were also added to the memorial. The original pipe organ fell into disuse in 1977 and was eventually replaced in 1995 by an electronic creation housed within the original frame and pipes. In 2005, the wooden cupola was taken down, having found to be dangerous. The bell was repaired and prepared for rehanging (dependent upon funding) and currently is on display, within the Church, in front of the war memorial.

In 2005, the hedging and lawn were removed and a concrete paved area was laid around the church, opening up the north and eastern sides. An impressive cross with “St Barnabas Church” was created in the pattern of the paving at the main entrance door. 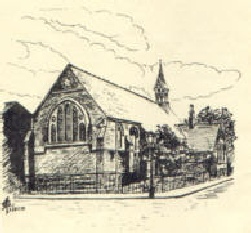 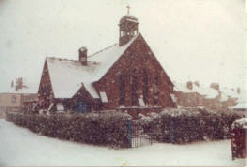 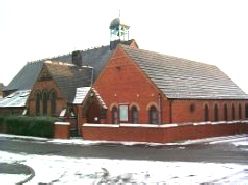 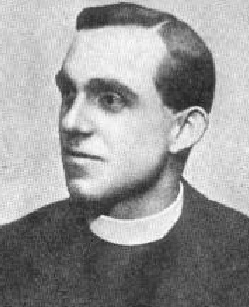 The photo on the left is of members of the church with the Curate in Charge, Revd. A.E. Crompton, in theVicarage Garden.

The second middle photo is the Saint Barnabas Church Choir with the Revd. William T.Thornber, in the Vicarage Garden, April 22nd 1939. 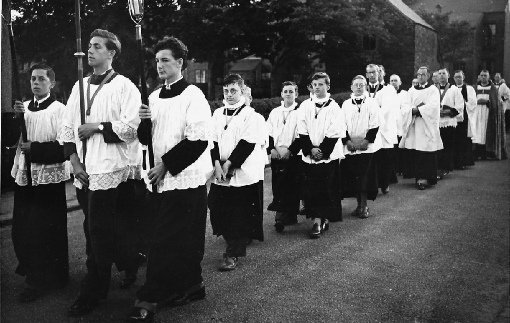 The bottom photo is the Saint Barnabas Choir, in the Patronal Festival, May 1957 - to see a link between this photograph and a church in Canada click here. 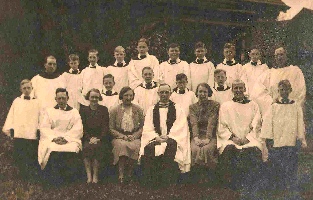 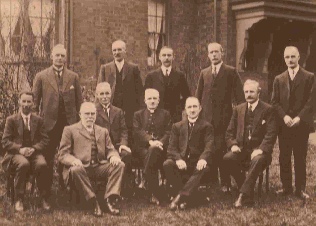 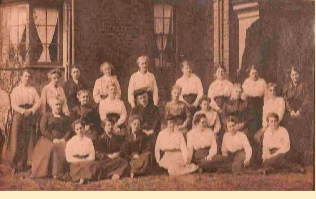 The first middle photo is the Revd. A.E. Crompton with the Sewing Guild in the Vicarage Garden, April 1921.

A Past Rector of Whittington.

A painful sensation was caused throughout the Staveley and Chesterfield districts by the tragic end of the Rev Clement Clover Ward, of Staveley, and a past Rector of Whittington, who died suddenly on Sunday evening at Pleasley Hill, Mansfield, where he was temporarily in charge of St. Michael’s Church.

The reverend gentleman had been apparently in his usual health, and had conducted the morning service. He was staying with Mr C. Busby, of Bagshawe Street, and after having his tea he retired

into another room about 5:30 in the afternoon, remarking to Mr Busby that he wished to read over his sermon before going to evening service.

Nearly an hour passed, but the clergyman re­mained in the room, and as the time for ser­vice was approaching Mr Busby became an­xious. Going into the room, he was shocked to find Mr Ward sitting dead in his chair. The manuscript he had been reading had fallen to the ground. He was sitting quite naturally with his legs crossed, and apparently the end came quite peacefully.

Dr Smith, who was immediately summoned, examined the body and formed the opinion that death was due to natural causes. Upon the facts being communicated to the district coro­ner, he decided that an inquest was unnecessary.

For the past three years the deceased clergy­man had been attended by Dr Court, of Stave­ley, for Bright’s disease. That he was aware that death would visit him suddenly, and at any moment, was evidenced by the care with which he had settled his affairs, and amongst his papers were found letters, which had been penned some time ago, addressed to his brother at Bath, his sister at Leek, and Canon. Molineux (Rector of Staveley).

In these he makes a strange request. It is that - his heart should be buried in the family grave at Leek with the remains of his father and mother, and that his body should be placed in a perishable coffin, and interred in the par­ish in which he dies.

Mr Ward was 55 years of age, and nearly half of his life had been spent in Derbyshire. A native of Leek, where his father was a well known silk manufacturer, Mr Ward graduated at Pembroke College, Cambridge, where he won the 3rd class

Theological Tripos. In 1877 he secured the degree of M.A., and entered the priesthood the following year, accepting the curacy of St. Margaret’s, Dunham-Massey, in the Chester Diocese, which he held for ten years.

He went to Whittington parish as curate in 1882, and for seven years was in charge of New Whittington, and it was mainly by his whole hearted efforts that the church of St. Barnabas was built.

Upon the then Rector of Whittington, the Rev Mr Botham, removing to Cambridge, in 1889, Mr Ward succeeded to the rectorate, but his occupancy of the living was short lived, and two years later he was compelled, owing to in­different health, to release himself from the re­sponsibilities which the charge of a large parish entailed. His resignation was deeply regretted by the parishioners, amongst whom he had gained unusual popularity, and whose respect he had won by his own generous and upright character.

The rev. gentleman next took a Curacy at Staveley which he held for twelve

months, and since then he had acted as a special "supply" clergyman in the diocese. In this capacity he had become widely known throughout the county, and whilst taking temporary charge of a church whilst an incumbent was ill, or filling a gap in the course of some clerical change, he invariably won the affection of the congregation. During this time he had made his home at Staveley, and at the time of his death was living at “Glebe House,” in Duke Street. Although he was what might be termed bird of passage in the diocese, he always retained a warm corner in his heart for the parish at Whittington, and paid frequent visits to his friends in that district..

Ashover was amongst the .places of which he had undertaken temporarily the spiritual charge, and during a stay of nearly a year in .this parish he won the warm regard of the people.

For several years Mr Ward was a member of the Diocesan Committee, and took a lively interest in the Clergy Pensions Fund.

Mr Ward was a single man. He was quiet and unobtrusive, but those who knew him best were sensible of the strong and noble character which lay behind his natural reserve. A simple but affectionate tribute was paid to the late Mr Ward by one of his closest friends a fellow clergyman in conversation with a, representative of this journal.

“He was an unassuming man, yet always quiet and genial and cheerful," said his friend. “He did a vast amount of good that, nobody knew anything about. In the discharge of his duties he was absolutely conscientious and fearless.”

One of the deceased cleric's, most prominent characteristics was his outspokenness and straightforwardness, but his somewhat blunt candour was allied to a generous and sympathetic nature. One of the deceased’s last acts was to attend the funeral of Mr Helm, the Church Defence Lecturer, whose death we announced a fortnight ago, and much of what appeared in our columns about Mr Helm was from the pen of the deceased clergyman.

In 1919, following the tragedy and losses suffered during the First World War, a war memorial was erected in the church listing the names of the 85 soldiers, from New Whittington, killed during the conflict - a large number for such a small village. After the Second World War the names of the 19 soldiers killed in that conflict were also added to the memorial.

The Rev Clement Clover Ward was the first Curate-in-Charge at Saint Barnabas and it was mainly due to his efforts that the church was built.. The following is a piece from a local paper about his death 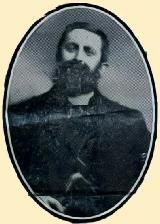